David Hester and Barnaby Brown began building this site in August 2013. Their goal has been to facilitate the study of pibroch by making the latest research and most significant source materials more accessible. Phase 2, completed in May 2018, drew together the work of many individuals who are thanked in this report. 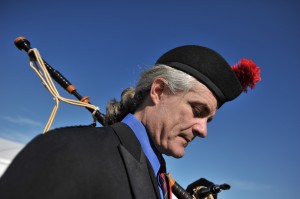 J David Hester, PhD, is a biblical scholar and recipient of the Alexander von Humboldt Fellowship. His expertise in tradition history and material culture provides him with the tools for understanding the transition from orality to literate culture and manuscript transmission, and helps him understand how to organize, identify and respect varying musical traditions reflected in the primary source material of pibroch.

During his academic career, he also founded a conference series that embraced the concept of dialogue over debate, an approach he brings to every discussion of music, musical interpretation, and pibroch performance.

He currently resides in Baltimore, MD, with his wife, Mary (a professional photographer). He has an older son, and a younger daughter who is a competitive grade 2 Scottish snare drummer. His instructors have included Allan MacDonald, Jori Chisholm, Maureen Connor and Chris Hamilton.  He is a member of the MacMillan United Pipe Bands organization. 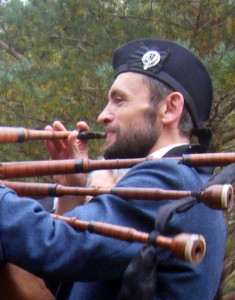 Barnaby Brown learned his Highland piping in two stages. The first, aged 8-13, involved weekly lessons from Thomas Pearston, Seumas MacNeill and Fred Morrison (senior) at the College of Piping in Glasgow, Scotland. The second, aged 25-31, involved regular visits and recording sessions with Donald MacPherson, culminating in his publication of A Living Legend in 2004. In the 12 intervening years, Barnaby was principal flautist of the National Youth Orchestra of Great Britain, studied music at the University of Cambridge, took up the baroque flute, sang with the Choir of Gonville & Caius College, Cambridge, and was a primary classroom music teacher in Rome.

Barnaby is the first Highland piper to apply the principles of the early music movement to pibroch. He began measuring historic instruments with Julian Goodacre in 1998 and plays a reproduction of a chanter from c.1680. His historically-informed performance style led to three appearances at the Edinburgh International Festival and his innovative collaborations have travelled to festivals all over the world. Through broadcasts, recordings, articles, editions and teaching, Barnaby has helped to revolutionise the way pipers approach the sources of pibroch, enriching the tradition beyond the legacy of the competition system. He is currently writing a PhD thesis on pibroch at the University of Cambridge and exploring ancestors of the bagpipe – aulos, Ur pipes and triplepipes. His thesis has two counterparts – this website and the CD Spellweaving.