In The Piobaireachd by Ian M’Lennan the author states that

Most pipers are of the opinion that Ceol Mor cannot be timed and marched to… The Piobaireachd should be played in perfect time, singling, doubling, trebling and quadrupling, and if this was attended to we would hear Ceol Mor being played to full grand stand benches instead of being played on the most remote corner of the field where the audience is absent.

This is an interesting perspective, and provides an interpretive counterpoint to the more rhythmically amorphous approach commonly heard today. From what I can ascertain, George Moss’s approach lies between the two extremes, but seems to err strongly on the side of metrical regularity.

One term George uses in his dialogues with Peter Cooke is “elastic”. My understanding of his rhythmical approach is that fairly metrical versions like the ones in his own maunuscripts form the “blueprint” of these tunes, which can then be allowed to breathe according to taste. This seems to be in contrast to the prevailing modern approach where the melody has to be inferred from versions whose less metrical timing has been learned by strict imitation of a teacher.

To illustrate this rhythmical aspect, along with some other matters relating to George’s style, we are going to explore his own manuscript for Struan Roberson’s Salute. There is no archive recording of the complete piece that I can find, but there is a recording of him playing the urlar on the practice chanter, which provides an excellent starting point here from 25:45. 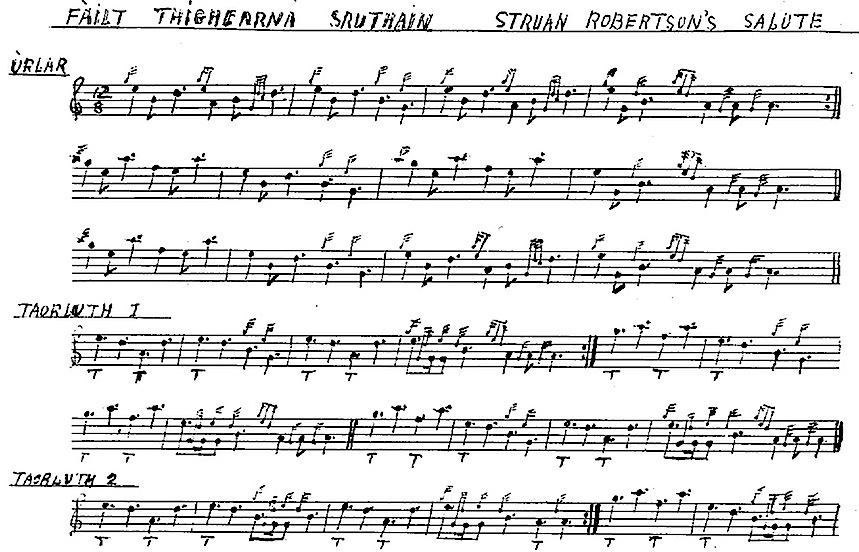 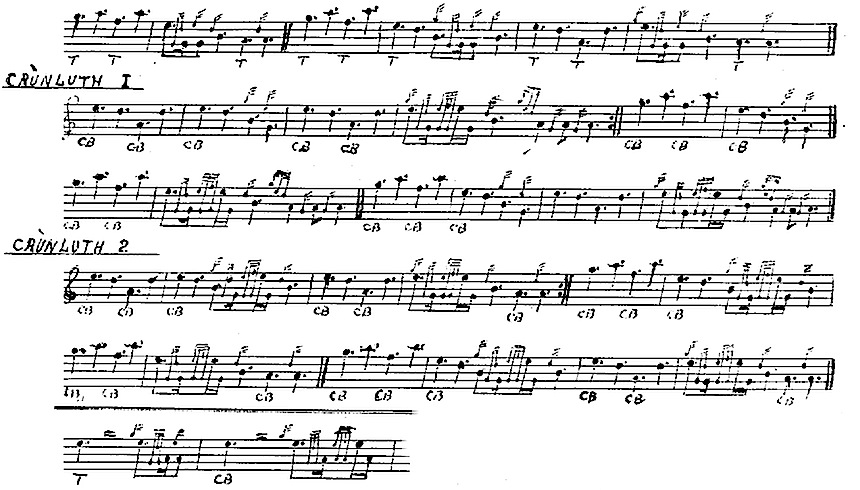 It seems that, much as in light music where there is a spectrum of “swing level” so that the notes of a hornpipe (for example) can be played as anything from straight quavers to strict dot-cut pairs and the precise rhythm eludes accurate notation, there is room for variability in the timing of the crotchet-quaver pairs within George’s own playing.

To my ears, the recording of the urlar linked to above is fairly close to an actual 6/8 crotched-quaver interpretation, except for the length of some of the notes at the end of phrases. However, for comparison, take a listen to these two versions of The MacGregor’s’ Salute played by George on the practice chanter.

It seems to me that the second one is much more like a true 6/8 version than the first.

The following image from Peter Cooke’s notes is very interesting in this connection.

Regarding the timing of the torluath, again in The MacGregor’s’ Gathering/Salute rather than Struan Robertson, we have:

The other main feature I want to discuss here is the timing of the crunluath breabach. We have access to several recordings of George playing the crunluath for other tunes. For example in MacDonald of Kinlochmoidart’s Lament (no. 1). George mentions that in his opinion the modern way of playing this variation is incorrect in that it emphasizes the wrong notes. You can hear a clear demonstration of this here.

George’s (and others’) notation of the crunluath breabach seems problematic in that it implies that all the notes of the movement are meant to fit into three quavers. If we attempt to do this, the effect of the breabach (“kick”) could be considered quite weak – listen here for example:

However, breaking this convention leads to a small but significant paradigm shift, which Peter Cooke was happy to make:

For the rest I have preferred to use a simpler kind of ‘time signature’ that shows solely how the beats tend to be grouped i.e. in 2, 3 or 4 time- for this then frees one to subdivide beats in various ways without worrying about whether or not the notes in the bars add up to a particular time value.

For my own purposes of practice and learning, I have put together a MIDI version of this tune according to my current interpretation of how George Moss might have approached it. As usual with these files, the MIDI is rhythmically rigid and lacks the human element, but I find it helpful nonetheless.

On a final note, it might behove us all as pipers to make sure we can play this tune, as apparently there was a common saying among pipers in George’s time: