I was asked to offer my thoughts on the interpretation of the Urlar of Lament for Donald of Laggan by a colleague who is instructing a student. That got me doing a bit of exploring among the manuscripts where I found a very interesting thing:

Which he later updated to reflect more of his personal style, one to which we have grown accustomed [Kintarbert]:

Now compare these to this, from Joseph MacDonald [J]:

What do you notice?  What I notice is that the first measure in MacKay reflects two typical stylistic idiosyncrasies of his style, both of which have resulted over the years in altering the original melody when played today.

The first is the hiharin, which in his typical way emphasizes the held-E cadence and destroys the rhythmic parallelism of that first crahinin (remember, hiharins are crahinins) with the rest of the piece. The following crahinin on E and F, once again, are standardized according to his own style, contributing even further erosion to the original melody’s coherence.

The second is that the very next series of notes, again quite typical of him, attempts to capture his stylistic trill from the next high-E cadence down to the B by means of (a) once again putting the held-E into the staff, rather than marking it as the embellishment it is, and (b) compressing the whole thing into a 16th-note phrase in an effort to make it fit into 4/4 time.  Now, there is much more to say about this interesting little phrase, which we will pursue in a later post.  For now, let’s just note how this phrase does not exist in the first line of Joseph MacDonald. 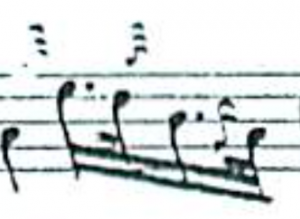 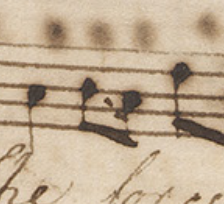 MacKay was a creative genius.  And the problem with creative geniuses is that they can be so easily misunderstood by subsequent, less capable artists who misread and misinterpret that original creativity.

My hypothesis is this: The original melodic tune was well known.  Well known enough to be an example of “Another Key for Rural Piece & Laments”, cited by Joseph as emblematic of a “Style or Taste…well adopted for Rural Ideas.”

What does the creative genius do?  Well, s/he takes a well known tune and riffs on it, the success of which lies solely on the fact that people know how the original sounds and can therefore appreciate the creativity of the new riff.

What do later generations do?  As time goes on, the connection between “riff” and original is severed.  All that is left is a score that is adapted literally and without familiarity of its context.  Eventually, the score becomes a canonized setting, which in turn becomes orthodoxy.  Later performances layer additional contemporary interpretive habits to the point, creating yet further distance between the score and the original song.

Still contributing to this distance: the original melody is rarely, if ever under consideration by the modern performer, who simply assumes that the score represents what needs to be played.  The result is a performance that is simply, and necessarily, uninformed, since the tune has been so thorough de-coupled from its origins and roots.

The result is a what I call a “damaged pibroch”.

Now, some may take offense at this phrase.  I offer little consolation to them, however:  a performance that does not understand or take into account the original tune or song behind it is like a house built without a foundation – it’s there, it may seem beautiful, but it is a rickety structure that can easily collapse.  We hear examples of this time and again, particularly (but not only) among new students of pibroch.

Even among those who have been immersed in pibroch, the depth of their exploration rarely ventures into the the unfamiliar settings of the primary source manager, much less so into the oral tradition behind and beneath the scores and yet still recoverable.

Pibroch is not the “classical music” of the bagpipe and should not be approached as such.  Classical music was written on the staff by and for musicians who were educated into musical theory.  While the same may be said of later pibrochs, the earliest manuscripts reflect a time in the history of the art form when the music was coming out of a folk music tradition.  That is, out of tradition or orality and aurality, not literacy.  Within this context, it was the creativity of the performer that made the music compelling.  Classical music at the time was also quite open to musical improvisation, but literacy has a way of consolidating performance, as the written text invites fixity and orthodoxy.

As long as we take the score as a fixed and immutable representation of the tune, as a standard upon which “accuracy” of a performance is to be judged; as long as we continue to overlook our tutors who told us over and over again to “find the music”, we misunderstand this great music (céol mor).

Just for good measure: put your own interpretive spin on this and feel free to leave us a recording: 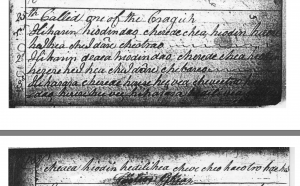 Here is a link to Allan MacDonald’s performance on Dastirum, working with Barnaby Brown: Listen.

5 thoughts on “Lament for Donald of Laggan”