I admit, I’ve been pretty impressed with some of the electronic bagpipes that I see around, like the Deger Pipes and the Technopipes, but they’re pretty expensive and not especially hackable. Then I stumbled upon the OpenPipe which is a bit more up my alley. 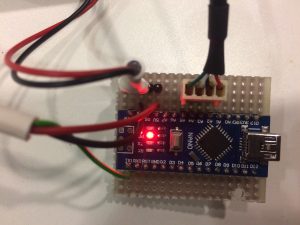 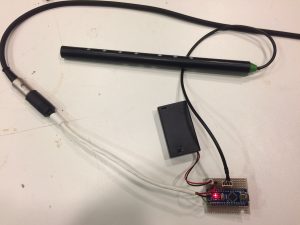 The OpenPipe is minimalist. It simply exposes 12 capacitative touch sensors using I²C which is a standard way to present sensors to a micro-controller such as an Arduino. Starting with the Free Software from OpenPipe Labs it was a simple matter to convert this to MIDI. Unfortunately there is no good Free Software midi sequencer for bagpipes, but I got very good results with Universal Piper. The results are illustrated below.

The other week, I was showing this setup to Allan MacDonald and we played around with it, and looked at a few tunes, among them Lament for Mary MacLeod. The latter is a piece that I already play, learned long ago in the standard, Piobaireachd Society Style. Something like this,

Allan tells a story of teaching it to an accordion player in a pub, as an example of how simple and melodic this music can be, especially if (arguably) extraneous cadences are stripped out. The result is a ground that sounds something like this,

My usual practice of taking a straw poll of whichever random people happen to be around me, musicians or not, comparing different styles this time yielded mixed results. They’re both very nice. Different, but very nice.

Really, the most interesting part of this piece is the first variation and its doubling. It can be played very beautifully. Reconsidering the cadences gets a very nice flow at the end of the singling. I’m now convinced that there should absolutely not be a cadence on the B there!

And of course there is the famous high-G in the last line of the doubling, also found in the taorluath and crunluath doubling. Colin MacLellan goes through this piece in an instructional video and thinks it is out of place and better to play an high-A. In the Set Tunes Series, William Donaldson presents some correspondence of Archibald Campbell, notably with Willie Ross suggesting that he and other notables prefer the high-A as well, but by no means considered the high-G incorrect.

Allan thinks, and I tend to agree, that the high-G is an important feature of the tune. A dissonant keening, powerfully expressing grief, effective in inverse proportion to its use.

3 thoughts on “Lament for Mary MacLeod”