Featured in the APC Guide to Pibroch, I am currently working through the piece in order to perform it next year at a number of venues. And, in the spirit of Learning Living Pibroch, I wanted to step through the score study here, in order to demonstrate the APC process I’ve adopted, and to solicit feedback from the community.

This piece is found here, on the Musical Materials site. It is only found in the Campbell Canntaireachd (among the materials prior to 1854), and so there is no staff notation from the time to give us an idea as to how it might have been played.

I’m going to start by going through one motion at a time, beginning with the Urlar.

Here is a copy from Campbell: 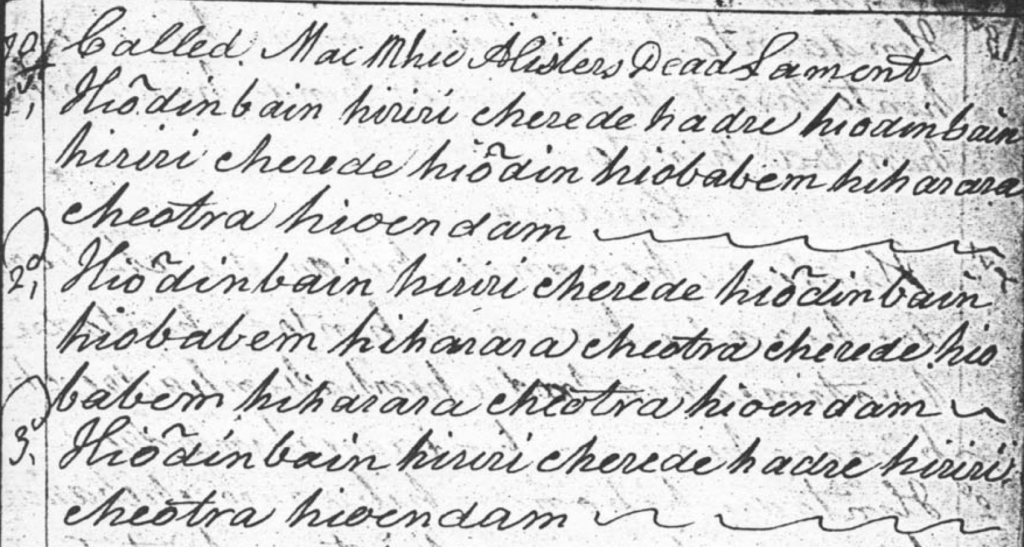 Here is my transcription, for easier reading:

Some have wanted to create a parallel between second phrase, first line hiõdin and the first phase, second line hiõdinbain, correcting the first in favor of the latter.

They also want to correct the final line, which scans “wrong” with only 7 “beats” or “phrases”; they note that the next variation shows the presence of a phrase on D-G, and so insert a hiobabem before the second hiriri (see *).

These transcribers may be right, but let’s see if there is anything particularly musically unsound be leaving it as is and performing it accordingly.

So, here’s what we’re going to work with for now. I will transcribe it into staff notation, just to make it easier for you to follow, but notice how I make very little by way of rhythmic indication (though I will be eventually be adopting a MacDonald style for the motifs). That is on purpose. I will spend the next week recording, recoding discussions with Allan, and eventually settling upon how I would interpret the canntaireachd.

See you in a week.