Here we explore the variety of crunluath and taorluath styles available to the performer.  Many of them are known, some are thought of almost as legends and myths.

Perhaps the most interesting thing  about them is their variety in the primary sources (in contrast to today’s movements) and the potential for musicality by choosing one style over another for a given tune.

Let’s begin by comparing this taorluath:

The original taorluath movement was much more rhythmically complex and open than is performed today, and the resultant effect is quite lovely. Today it is known as the “redundant A” taorluath, and nobody plays it anymore.  And yet,  the rhythmical expression is very pretty, the movement sounds quite dexterous, and the melody is retained.

Now look at this, just for the sake of history and curiosity:

These are from the Hannay-MacAuslan collection, predating just about everything else we have.  Note both the absence of the second low G in the grip, and the presence of the “redundant A”.

It is worth noting that today’s taorluath movement was introduced as late as 1907 with John McLennan’s collection; thereafter the Piobaireachd Society adopted it.  When you think about it, especially after reviewing the earliest primary sources, it took a lot of hubris to overturn centuries of performance history by eliminating the “redundant A”.

You might not know what this refers to, actually.  Today, it is the taorluath movement represented by rapid-fire G-D-E triplets typically (but not always) on low A before a theme note.

But here’s the thing about them.  Take a look at these:

How would you play these?  You could try them something like this:

These are certainly the more familiar pattern, aren’t they? But elsewhere you may see them scored like this: 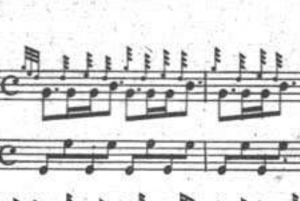 So, there seems to be a bit of ambiguity regarding this type of taorluath. But they are only a puzzle until you realize that the periods of Late Baroque and Early Classical music was dominated by the genius of the musical performer to bend and shape rhythms and even melodies (e.g., cadenzas) according to her or his own interpretive understanding of the tune.

In the earliest version we have of this form of taorluath (from the Hannay-MacAuslan collection), neither style is specifically indicated in the score.  Apparently either it was played straight, the musician would “understand” how to play it, or it was up to the musician’s discretion which style to play.

If the last is the most likely, it is because the musician would understand cues from within the tune itself: its phrasing, its style.  For example, in the case of Donald MacDonald’s version of Old Men of the Shells (PS 225), one could justify playing the taorluath gearr style throughout by reference to the first measure of the cycle:

On the other hand, Angus MacKay knew the cycle only in consistent triplet style:

Nevertheless, the take away here is: there is more than one type of fosgailte taorluath, and when you come across an ambiguous score, you must decided upon one or the other.

This movement is extremely difficult to play, much less to play well.  It is so puzzling, that later collections did not know what to do with it: simplify it to a 1/6th note triplet fosgailte taorluath, or transform it to a modern taorluath.  Stick with what you see, and when you get the hang of it, the result is remarkable in its musical impact.

Like the crunluath a mach, the taorluath a mach also maintains the rounder rhythmic structure (dotted 6/8) and avoids the low As:

You’d be hard put to find them, but these movements do exist. (Check out Rout of Glenfruin [PS 13], for example.)

The top version not only includes an intermediary (“redundant”) low A, but suggests a 6/8 pattern with final E of considerable weight.

Crunluaths of the primary sources have two characteristics that were universally known by all pipers until the 20th century:

1. A lilting, 6/8 pattern; After all, Joseph MacDonald refers to “creanluidh” as the “round movement”.  In this regard, the more familiar and modern pibroch performance of the crunluath does not live up to its name.

2. An intervening low-A grace note after the initial grip, known now as the “redundant-A”.

A third characteristic of the MacDonald scores (as well as Angus MacKay) is something people since David Glen no longer perform:

The crunluath, like the taoluath, underwent this transformation away from the “redundant-A” style of old to its modern version only in the last century.  In fact, it is within living memory the folks such as the legendary Robert Reid played it:

You may wish to listen to this by George Moss, taught by Sandy Cameron:

That modern performers have no inkling of the controversy is a testimony to the weightiness of the publishing medium as a means of transmission in the last century.  Fortunately, we are now in a position to review the original primary sources ourselves, where we see the “redundant-A” style universally.

One more, and perhaps the most fascinating and important crunlauth captured in only in Hannay-MacAuslan. It is a crunluath to a dari.

Although this crunluath is unique to this source (and only found in the final measure of the urlar of Sword’s Lament PS 172), the interpretive and compositional implications of this beautiful movement are enticing: shifts in key in final variations could take place by the simple replacement of the edre with the dari.  A remarkable new beauty be brought into existence.

One more comparison.  Consider these versions of crunluath a mach variations:

In the older books and manuscripts, traditions surrounding the crunluath a mach are notable in the way the notation attempts to capture the rhythm of the particular school being transcribed.

The MacKay crun a mach, for example, is pretty straight forward, with equal emphasis on the first and last notes:

David Glen (who is a secondary source) captures a later style that emphasizes the middle note of the phrase:

The crunluath a mach movement in Hannay-MacAuslan is also played “open”, but without the full grip (typical of that collection).

Note how in the primary source examples weight is given to the theme note, while the typical structure of the crunluath is maintained.  In the modern version, the theme note is heard only throught the flurry of gracenotes leading to the final E, and the rhythmic structure is inverted and emphasizes the final note.  The focus is upon virtuosity, not melody.

Quite frankly, this is a style of performance everyone knows they are playing wrong, but they just won’t do anything about it.  Simply put, the Gaelic word “fosgailte” means “open”.   There really is no reason to play this with grace notes down to the low “A”.

However, for a variety of reasons (mostly historical, and mostly attributed to a couple of notable individual’s desire for consistency), today they are played “closed.”

The open style is simple, and it is elegant.  The result is a very light, open feel to the movement.

In a stroke of complete oddity, the Piobaireachd Society in the mid-20th century decided that there could be a fosgailte crunluath a mach cycle, which is characterized by these crunluaths being played “open”.