While we are on the subject, I’ve been pondering this issues for quite some time, and recently overheard arguments regarding Joseph MacDonald, whose musical notation seems to suggest that the rhythmic component of the modern taorluath and is more in keeping with 18th century practice.

Notice how the first four beats of the movement resemble the structure of today’s taorluath. The difference is only the the third beat is low-A, and not low-G: 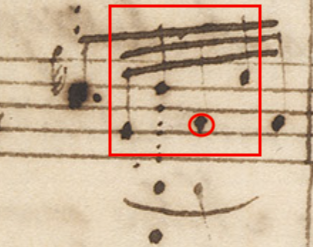 This is a very interesting thing, because while structurally it could be argued that it is identical to the modern taorluath (four notes), the aural experience of these movements is audibly quite different than the modern style.

And we see empirical testimony of this difference in the manuscripts themselves that the middle A was important, and that the compound-rhythmic structure was fundamental to the hearing of the transcribers and performers.

By the time of Robert Reid, however, the movement became crushed, and despite his protestation (and his ability to lay it out carefully), the middle A has all but disappeared.  This can be attributed to the general musical dominance of the Army school and light music, which had to play these movements fast enough to fit into the quickstep marches.

Then came the Piobaireachd Society, with Archibald Campbell of Kilberry coordinating with the Army School to eradicate the so-called “redundant-A” in publications.

Note the eradication of three-beat structure of the movement.  While early proponents felt vindicated by the discovery of the Joseph MacDonald material, that material was an ambivalent support for their cause, at best: not only did he clearly indicate the dominance of the low-A throughout (as did Dow and other non-piping scores at the time), but also clearly indicated the three-beat rhythm of the movement in his notes.

Additionally, it is well worth noting that even today, the roots of the original low-A centric movement continue to be played in the low-G taorluath himdarid:

The value of the traditional, full-grip (or half-grip) taorluath is its rhythmical and harmonic distinctiveness and musicality. It is relatively simple to play (a grip to low-A followed by an E gracenote on low-A).