This post marks a new beginning. Let’s call it Phase 2.

Today is the 2nd anniversary of David Hester’s death. David built this network of resources, pouring his astonishing energy into making things happen. Big things. A dolphin turning around an oil tanker. I was the cumbersome academic who fed him stuff – partly my own research, mostly Roderick Cannon’s.

David was a rebel of the highest calibre: courageous, clear-sighted, warm-hearted, often scary to work with but always exhilarating. He was a warrior set on making the world of pibroch one we all feel proud of. He fought for a liberal ecosystem that is not scourged by fundamentalism or intolerance; one that is diverse, inclusive, curious and imaginative.

Here is a map of what David built with rare vigour and generosity of spirit:

I was deeply involved for the first three years. We often sparred, discovering each other’s strengths and weaknesses, knowing that our differences of perspective made this network of resources stronger. Together we developed Musical Materials (presenting pibroch’s raw evidence) and Learning Living Pibroch, a multi-author blog, the function of which is to process a mass of evidence that is difficult, chaotic and contradictory. The synergy between these two subdomains helped develop understanding, spark new insights, and foster a collegial atmosphere. Emphasis was on growth and evolution rather than consolidating an echo chamber, perpetuating old habits.

Between 2013 and 2016, my time and the manuscript digitising costs for Musical Materials were paid for by the UK’s Arts and Humanities Research Council through the Universities of Glasgow and Cambridge (here is a report). Between June 2016 and August 2019, David continued on his own, developing the Modern Pibroch Library and APC Guide to Pibroch. My hands were full raising kids, reviving the aulos, and writing my PhD thesis, but I continued to update Musical Materials, which I found to be an invaluable research tool. Conversations with Ronald Black propelled progress on the Notes on Gaelic Titles, for example resolving the enigmatic ‘Square Reas March’ to Scourie’s March. Scourie was the general, Hugh MacKay, who built Fort William in 1690.

David Hester died suddenly, tragically, without a permanency plan in place for the awesome resource he had lovingly hand-crafted. I would like to thank his wife, Mary Gardella, for helping us rescue it. We are now in a transitional period, shaping its future. I would like to thank Prof Josh Dickson of the Royal Conservatoire of Scotland for accepting the challenge of leading the site forward as editor-in-chief. I am the publisher, for the time being, inheriting David’s role but lacking his website expertise and community-building talent.

We would like to thank the Royal Conservatoire for awarding Josh a research grant – seed funding to rejuvenate and secure the future of the resource – and the Piobaireachd Society for helping us figure out how to move forwards collaboratively. This was one of the sticking points between David and I. He would throw down the gauntlet fearlessly, provoking discomfort, whereas I am more naturally a diplomat, building bridges.

The site has been in hibernation for two years. In this reawakening, we want to keep everything that is strong but address its weaknesses. Here is how we currently envisage developing its usability: 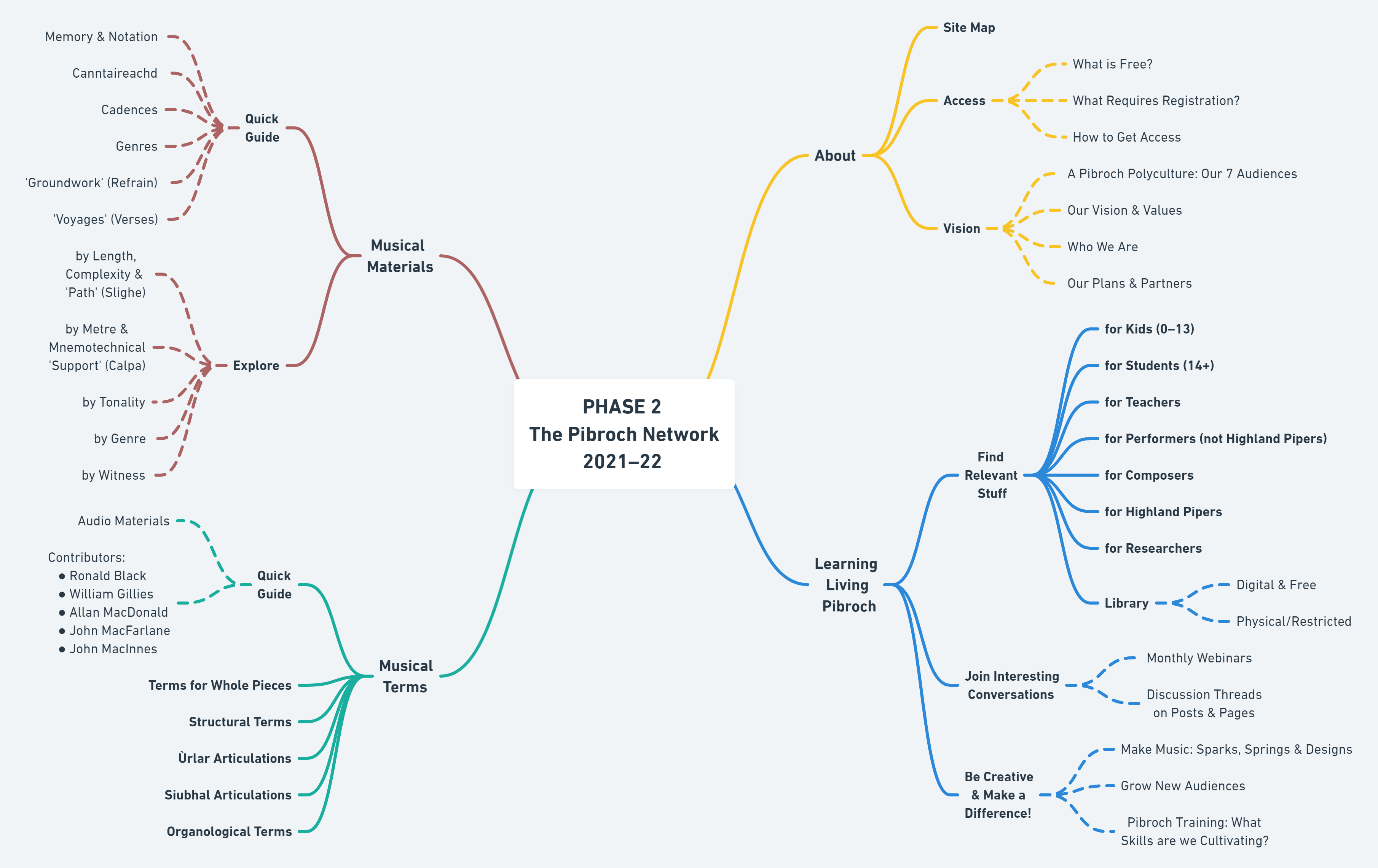 But the biggest question is how do we replace David? He leaves an enormous hole and we want to fill it wisely.

Josh Dickson is Head of Traditional Music at the Royal Conservatoire of Scotland. He led the design of the BMus Piping degree curriculum in 2015 and has been using altpibroch.com in his teaching since 2016. Josh is our editor-in-chief.

Kate Carpenter is exploring canntaireachd as part of her part-time MA in graphic design at AUB. Outside of her studies, she oversaw the redevelopment of her company’s website, atelierten.com. Kate is our design consultant.

Jimmy Carnegie has 25+ years’ experience of advising businesses at senior level. He teaches the highland bagpipe at Cambridge schools and won the Grade Two pibroch event at the World Solo Amateur Piping Competition in 2020. Jimmy is our strategic & financial consultant.

Jamie Green is a software developer and sound artist/writer living in Los Angeles. He operates besom presse, an imprint concerned with *perceptually activated* works on paper and sound media. Jamie is our development consultant.

Barnaby Brown sings, composes, and plays triplepipes and doublepipes. He co-founded altpibroch.com with David Hester in 2013 and will shortly submit his PhD thesis, ‘The Craft of Pibroch: a study of the technical language of Scottish Gaelic pipers’. Barnaby is our publisher.

As a team, we aim to be human-centred, playful, and courageous. Like David: caring, outward-looking, and agile. We are thinking about transforming the Alt Pibroch Club into:

The Pibroch Network – curating a network of digital resources devoted to demystifying every aspect of pibroch. By listening, collaborating, and learning, we cultivate a pibroch polyculture that is inclusive, diverse, and imaginative.

If you would like to join us as a volunteer or (down the line) as a freelancer, please get in touch with Josh (j.dickson@rcs.ac.uk). We are in need of WordPress developers, but are also interested in other skills relevant to digital sustainability, building partnerships, and serving different user types more effectively.