The children’s game ‘Telephone’ (called ‘Chinese whispers’ in the UK) can have hilarious results. It works best when the seed phrase is unexpected. The same is true in oral transmission: bigger changes occur when the model is unfamiliar. If no template exists in the listener’s memory, then the closest fit can produce a laugh.

The prize for the funniest garbling of a pibroch name must surely go to PS 108. The mixture of cultural expectation and market forces 200 years ago generally leads to more dignified deviations appearing in print, whether by accident or intention. The publication date of Bowdler’s improvement on Shakespeare is significant: 1807. This advertisement appeared in The Times for its 1819 edition:

1819 is the year that Donald MacDonald published his book, known on this site as D1. It contains the following title: 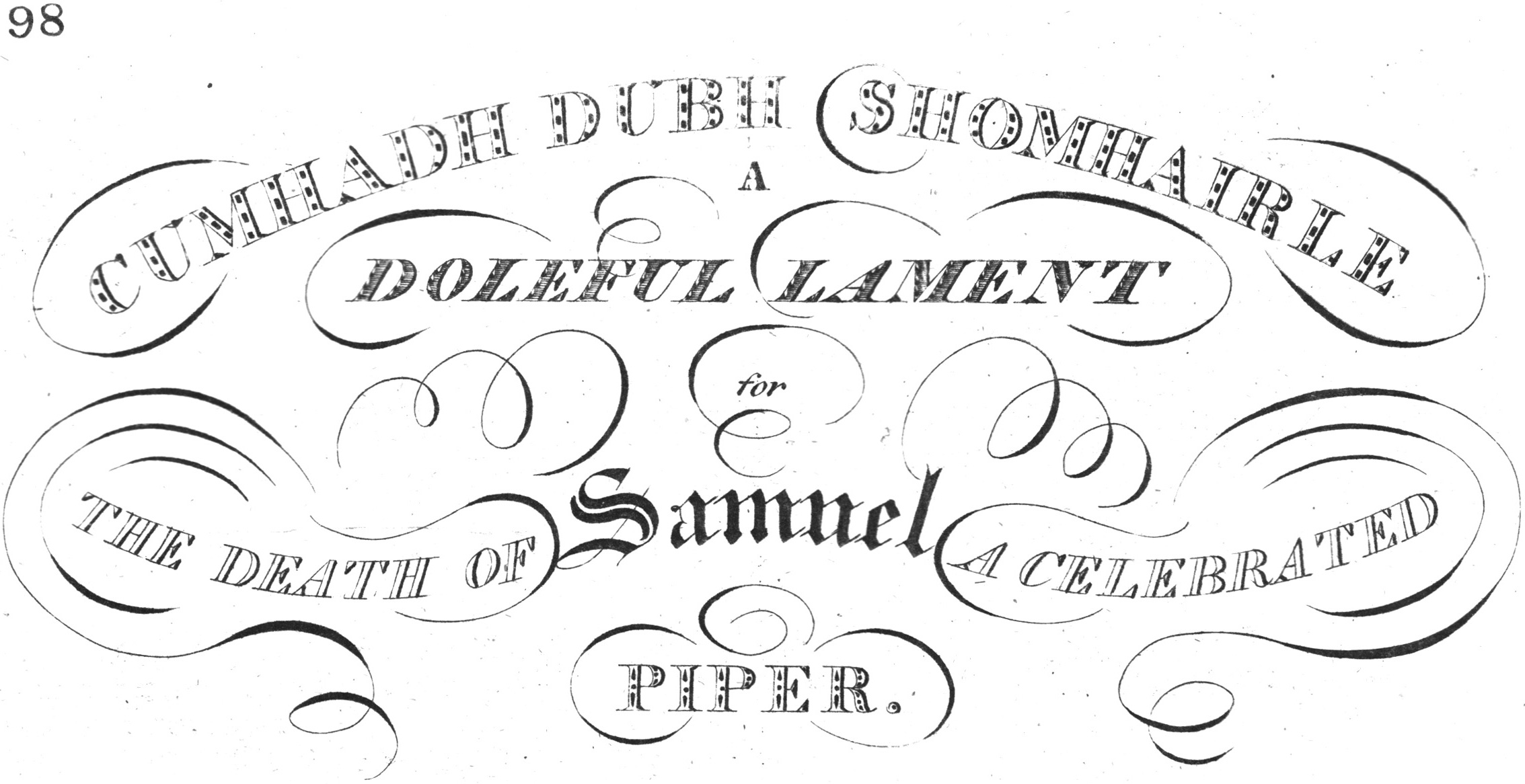 I don’t think MacDonald altered this pibroch title intentionally. The most plausible explanation for the conflicting evidence we have is that he was swayed by the cultural climate of his time. Between 1760 and 1819, pibroch was increasingly identified as something ancient and high-register; vintage not plonk; classical rather than popular music. Neither MacDonald nor his readers would expect a pibroch to be associated with a dog. Titles containing the word Cumha (lament) were abundant, whereas titles containing the word Cù (dog) are not found in any form of print – book, competition advertisement, programme or newspaper report – until 1932. It then appears in the notes of Piobaireachd Society Book 4 with the comment ‘This grotesque title presumably is a mistranslation of some Gaelic phrase’ (p. 122).

The perception ‘grotesque’ betrays an ignorance of Gaelic culture. It seems that we have not just one pibroch about a dog, but two: ‘Samuell’s Black dog’ (PS 108) and ‘McLeod’s Dog Short Tail’ (PS 131). The question is, were these dogs real or are they mythical? Dogs feature prominently in Gaelic storytelling, so it comes as no surprise to find them in pibroch titles. It is equally unsurprising that a native Gael in the early 1800s should settle on cumha in place of cù, particularly in the context of a book produced for the English-speaking gentry.

Today, I updated its page on our Musical Materials site, adding new recordings for the pronunciation of its variant titles. Warm thanks to Allan MacDonald for providing these recordings, which are part of a long-term project increasing sensitivity to Gaelic culture in the piping world. Allan also contributed an illuminating discussion, explaining how the adjective dubh (black) could describe the dog, the lament, or Samuel (an anglicisation of Sorley). It lasts just 4 minutes; do take a moment to listen.