A couple of weeks ago, I was in Sweden piping at the opening of the Archaeomusica exhibition. Most of the pipes in my case were reproductions of archaeological finds. In 2008, a 40,000-year-old vulture bone with 5 finger holes was unearthed in Hohle Fels cave, southwestern Germany. On 8 April this year, I made a reproduction from a Gyps fulvus radius bone kindly provided by the Centro de Recuperación de Fauna Silvestre de la Alfranca, Universidad di Valladolid and Jean-Loup Ringot. After a day of careful scraping, I took a spare launeddas reed and pushed it into one end. To my astonishment, a familiar scale fell out of the instrument. Effortlessly.

The first reed I tried worked beautifully and was made by Luciano Montisci in Sardinia. Shortening it by half a centimetre produced a scale with three perfect 5ths: G-D, A-E and B-F#. That brings 188 pibrochs roughly into range! The scale is pretty much identical to the Highland bagpipe, except it lacks the top two notes (High G and High A). Even the pitch is the same (B flat).

Can we say that Homo sapiens sapiens has been piping with this kind of scale and pitch for 40,000 years? Definitely not! No two bones are identical. Put the reed in the other end and you get a scale that is more exotic. I used a whole radius bone, provisionally interpreting one of the find’s ends as a break although, under the microscope, it looks more likely that it was an oblique cut with a carefully-worked surface. Jean-Loup Ringot has made a serviceable clarinet by tying a piece of birch-bark against this smooth surface. The result is extremely satisfying to play, but I am no expert handling birch bark reeds.

The Hohle Fels bone can also be played as an end-blown flute, but that is MUCH more difficult because of its narrow bore. Playing it as a flute, the finger hole placement doesn’t make any sense to me – the lower finger holes seem redundant. From my own experiments, I find the various reed solutions more compelling because a child can make music instantly,  the finger holes all have an obvious function, the pitch on every note is more stable and the value for effort is higher. I am assessing ‘value for effort’ here in terms of musical possibilities for hours of practice – the reward for the time invested –  favouring possibilities that are consistent with ethnographic evidence collected worldwide, rather than with the music of modernist twentieth-century composers.

Let us now fast-forward 38,000 years – a drop in the ocean of our evolutionary time-span. The earliest-surviving complete melody, the ‘Seikilos Song’, is also compatible with Highland piping. Allan Speedy pointed this out earlier today and, by coincidence, I have been exploring how to play this jaunty little tune not on the bagpipe but on a Graeco-Roman aulos. You can see how the aulos works in this video:

The Seikilos Song survives on a stone pillar erected near Ephesus in Turkey, possibly in the 2nd century AD. This is what the notation looks like: 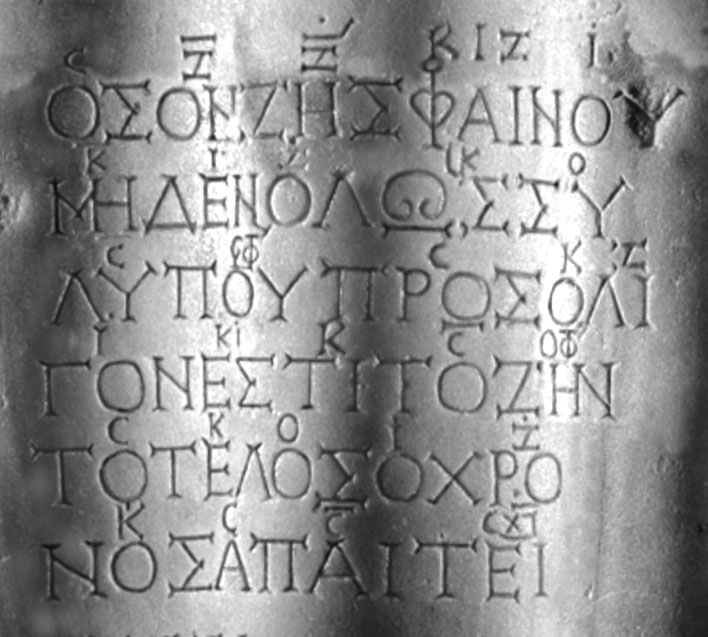 Stefan Hagel taught me his interpretation and you can hear me developing a pipe version in this documentation of my journey learning to play the aulos. I play the whole tune at 9:35. It isn’t far removed from a Waltz and fits well on Highland pipes – just put the last 2 notes up an octave. Stefan Hagel plays it on a reproduction of pipes from Pompeii buried under ash in 79 AD. His astonishing results in collaboration with Peter Holmes and the University of Middlesex suggest that modern Highland bagpipe pitch is consistent with Imperial Roman pitch: A = c. 480 Hz.

2 thoughts on “The world’s oldest tune and pipe”