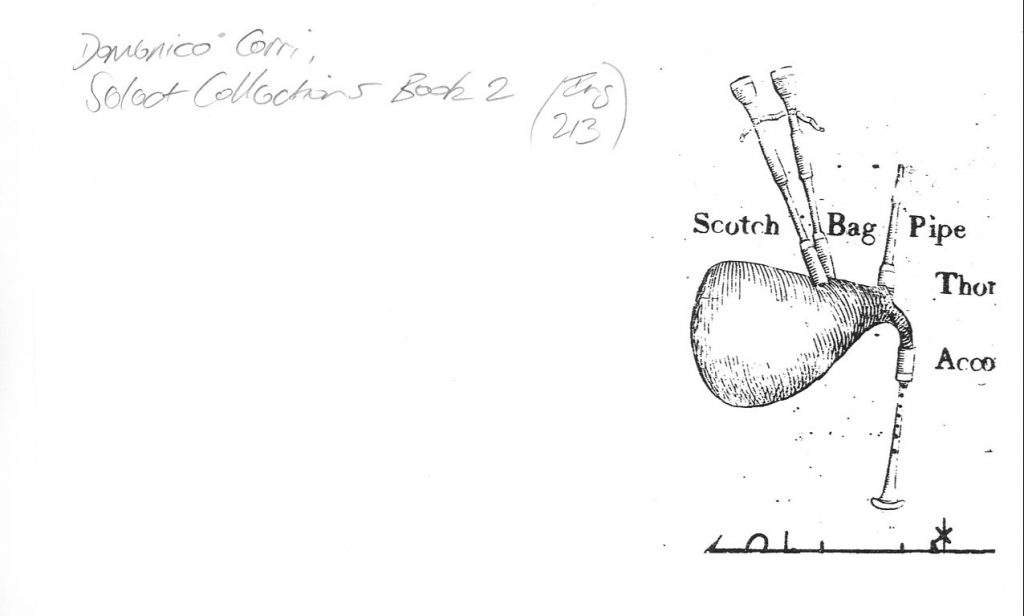 Although it is possible to turn back a clock, in reality it does not turn back time; the earth still continues rotating around the sun as it always has done. The stimulus for this article was David’s series based on the Hannay-MacAuslan MS. Working on the rather optimistic assumption that it should be played exactly as written, and being even more optimistic in assuming that those interpretations were given time in the competition system, there are still some difficulties with producing a ‘competition performance’ exactly as it would have been at the time the manuscript was written.

We know that at that time the 2-drone pipes were still being used in competitions since it was not until circa 1822 that they were finally discouraged. We also know what they looked like as this drawing of one was printed in the second of Domenico Corri’s 2-volume New and Complete Collection of the most Favourite Scots Songs, published in Edinburgh circa 1783. However, returning to the original assumption, even if the ‘re-constituted’ Hannay-MacAuslan versions made it onto the modern competition platform, what odds am I offered that the other pipers would object to competing against a player of the 2-drone pipe with its advantage of one less reed to go off with a mind of its own? Yet this was the the actual reality of the performances at the time David is trying to resurrect.

Remaining with the topic of the 2-drone pipe, there are problems answering both the question of how prevalent they actually were, and why they were actually favoured over pipes with the bass drone. In regard to the first question of prevalence, the main problem is that the contemporary sources do not distinguish between pipers using two or three drones, they are all just pipers. Which, prior to the advent of the competitions, does seem to be telling us something, even if it is not clear what.

However, always willing to place my neck on the block in the cause of research, I would suggest that at times it is possible to come to a firm opinion on when the ‘piper’ does have a 3-drone pipe. For example, we know that William Cumming piper to the Laird of Grant played with three drones because we have a painting of him doing just that. It is also noticeable that he has a large flag attached to his pipes displaying the Grant armorial. Take away the bass drone and it would be very difficult to fly such a flag, so we can rest on fairly solid ground when suggesting that two other pipers who also are known to have had their patrons’ armorial flags would also have been playing with a bass drone.

These two pipers interestingly appear around the same time as Grant’s when, in 1713, Atholl’s piper Donald MacLaren alias MacGregor was advanced one year’s salary of £40 Scots to replace the ‘flag’ which had been damaged by the local people. The piper was in Balquidder, so it was possible that the locals did not appreciate being reminded by the armorial that they were Atholl’s tenants. The second of these pipers is even more informative as the account from 1712 for the piper’s flag with the arms of the Marquis of Huntly on it is still around in the Gordon MS. It shows that the armorials were actually made by one of the Scottish Heralds and the cost was £41 14sh Scots.

The Huntly piper was probably a William Gordon who appears in the accounts as a piper around that time. It is also worth noting that in terms of costs these pipe banners were some ten times as expensive as the cost of the pipes that bore them. Even as late as the time when the Breadalbane Fencibles were raised for military service and a pipe banner with the Highland Society’s arms were given to winners of the competitions, along with the prize pipe, the ‘flags’ were still more expensive than the pipes: around £12 for the banners compared to £7 7 sh for the 3-drone pipe. In other words, the ostentatious display of the patron’s armorial was one reason for turning their piper into part musician and part flagpole.

What then do we know about the rest of that piping world who used 2-drone pipes? Well, it is a fair bet that they or rather their patrons did not run to expensive pipe banners requiring display. It is also unsafe to assume that the patron’s wealth and status is always a guide to nature of the instrument (or flagpole) used by the patron’s piper. The Earls of Breadalbane were among the wealthiest lairds, not just in Perthshire but also Scotland, yet we know that the pipes played by John MacGregor, the late eighteenth century piper on the Breadalbane estate, were 2-drone pipes. They are currently on display at Blair Athole. Of course, once the Highland Society competitions started to be won by members of his family, one of the 3-drone prize pipes became their normal.

What we do not know, however, is which version of the instrument the MacCrummens were playing. It is certainly possible to construct an argument that, set against their historical background, the odds are they actually played both. Which brings us back to the reasons many pipers clearly preferred just the two tenor drones and no bass. It is a subject about which there is little or no information, even of anecdotal form. But there are some rare comments about piping by pipers that were recorded in London around the middle of the nineteenth century.

These comprise a series of accounts collected pretty much from their mouths by Henry Mayhew and published over four volumes called London Labour and the London Poor. Among those he interviewed were a number of Scottish pipers living and working on the streets of London. One in particular makes some interesting comments on the use of his drones. Many of the pipers were old soldiers but in this case it was his father from Argyle who was a piper with the 92nd. While the father was away with his regiment, the eldest son earned money playing on some ‘small pipes’ the father had left behind. By the time of the interview, the father was invalided out and and the second son was playing his father’s full set.

When I play in a gentleman’s room I don’t put the drone on, but only play on the chanter, or what you would call the flute part of it. I cut off the drone, by putting the finger in the tall pipe that stands up against the shoulder, which we call the drone pipe. The wind goes up there and if you stop it up it don’t sound. A bagpipe has got five pipes – the chanter, the drone pipe, the two tenor pipes, and the blow-stick, through which you send the wind into the bag, which is of sheep skin covered with green baize. …

When I am playing in the streets I put the drone on and I can be heard miles off. I’ve very often had a horse shy at me…

I get my reeds from the Duke of Argyle’s piper. He’s a good friend to me, and very fond of me. They are made of thin pieces of split cane… Before I play I have to wet them. They last me six or seven months if I take care of them. The Duke of Argyle’s piper never grumbles when I go for new ones. When I go to him he makes me play to him to see how I’ve got on with my music. He’s a splendid player and plays from books. I play by ear.

The noise dosen’t affect the hearing nor has it Jim [his brother]. But my father’s quite deaf of the left ear, where the done goes. I never have the drone on, only very seldom. When I have them on I can’t hear anything for a few seconds after I leave off playing.

Apart from their father’s military pension of 1 shilling a day, due to loss of a leg during the Punjab War, the rest of the family income came from the children’s piping – sometimes from piping on the street but also from playing at ‘gentlemen’s houses’ (often, it would seem, at General Campbell’s). Since the definition of a ‘professional’ is someone who practices their profession for a living, these were professional pipers. Even within the world of piping there was and always had been more than one level. For a top position, those early piping competitions were the place to be seen and heard to try for an appointment to a more prestigious position.

8 thoughts on “Turning back the clock ?”