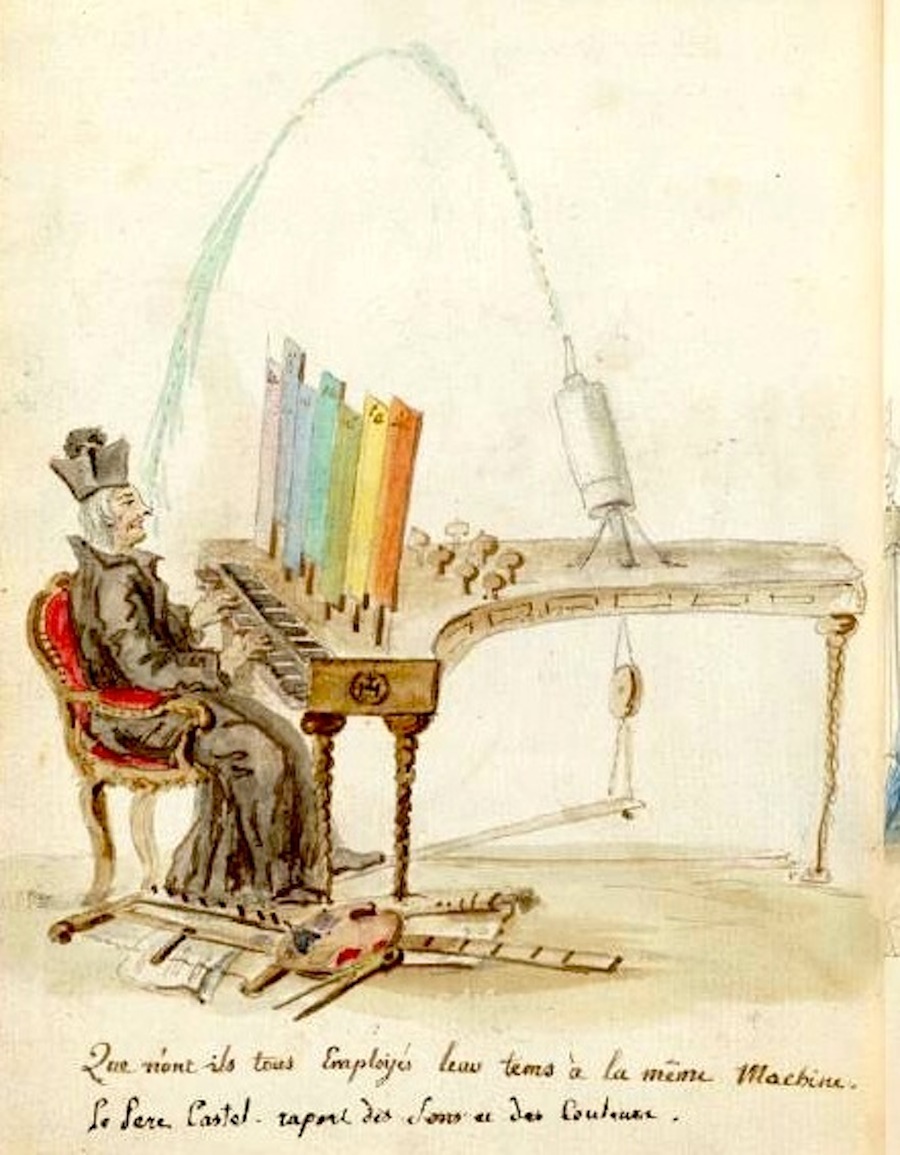 In Part 1, I observed how the difference between sound waves and light waves has severed the vocal practice of canntaireachd from its written forms. In this part, I explain the rationale for a colour system that could heal the rift, making canntaireachd easier to handle.

I have been using colour to communicate pitches in music education since 1995. That was when I bought rainbow marker pens and stuck several hundred spots on a fleet of xylophones and metallophones in St George’s English School, Rome. My objective was to get whole classes of children aged 3–12 making music that sounded good. I didn’t want a repeat of my own childhood experience in Glasgow – a class of thirty 7-year-olds blowing recorders sounds horrible!

Using routines like “Stick on your nose! Stick on your tummy! Stick on your head! Stick on the red note!” I found I could quickly get results with young children that not only preserved my sanity as a classroom music teacher, but got passers by to put their ears to the door. The key to success is a systematic use of colour.

In mainstream music education, colours are generally assigned to the white notes of the piano as follows:

The association between the colours of the rainbow and the notes of the octave is very old. The caricature above by Charles Germain de Saint Aubin (1721–1786) is of Louis-Bertrand Castel’s ‘ocular organ’. The earliest evidence I have found is in Isaac Newton’s writings on optics; however, I suspect the idea was commonplace centuries if not millennia before Newton:

an Assistant whose Eyes for distinguishing Colours were more critical than mine, did by right Lines αβ, γδ, εζ, &c. drawn cross the Spectrum, note the Confines of the Colours, that is of the red MαβF, of the orange αγδβ, of the yellow γεζδ, of the green εηθζ, of the blue ηιχθ, of the indico ιλμχ, and of the violet λGAμ. And this Operation being divers times repeated both in the same and in several Papers, I found that the Observations agreed well enough with one another, and that the rectilinear Sides MG and FA were by the said cross Lines divided after the manner of a musical Chord. Let GM be produced to X, that MX may be equal to GM, and conceive GX, λX, ιX, ηX, εX, γX, αX, MX, to be in proportion to one another… and so to represent the Chords of the Key, and of a Tone, a third Minor, a fourth, a fifth, a sixth Major, a seventh and an eighth above that Key

Unfortunately, a 7-colour system that repeats at the octave doesn’t transfer well to the Highland bagpipe. The pipe has nine scale degrees and Low G and high G possess very different tone colours. In about 1760, Joseph MacDonald wrote:

This is the beginning of a very soft Lament, dedicated to the Chief of the MacCleods of Sky. It touches upon [high] G in the Ground frequently, & in the runnings the force of the style lies upon the Lowest G, so that we may say it is a different Species of that Key.

There is another more basic reason for rejecting a 7-colour system. Part 1 identified the fundamental problem as ambiguity, noticing that ho stood for either C or B, and hin stood for either low A or low G. For a Highland pipe colour system to be fit for purpose, making Gaelic lyrics as well as canntaireachd vocables easier to handle, nine colours are essential.

The 9-colour system I introduce in this series is custom-made for Highland bagpipe music. The colours are assigned to pitches in a way that is sympathetic to long-established melodic conventions, bringing out the tonal contrasts between pieces and phrases. Rather conveying the relative height of each pitch in the scale, the colours convey their distinctive timbral characteristics. This is done by taking the drones into consideration.

The tonal quality of each scale degree is defined by its sensory dissonance, or the combination of chanter and drone spectra. This is basically the extent to which drone and chanter harmonics coincide. The following graph shows curved dissonance peaks and sharp dissonance minima across the range of the chanter: 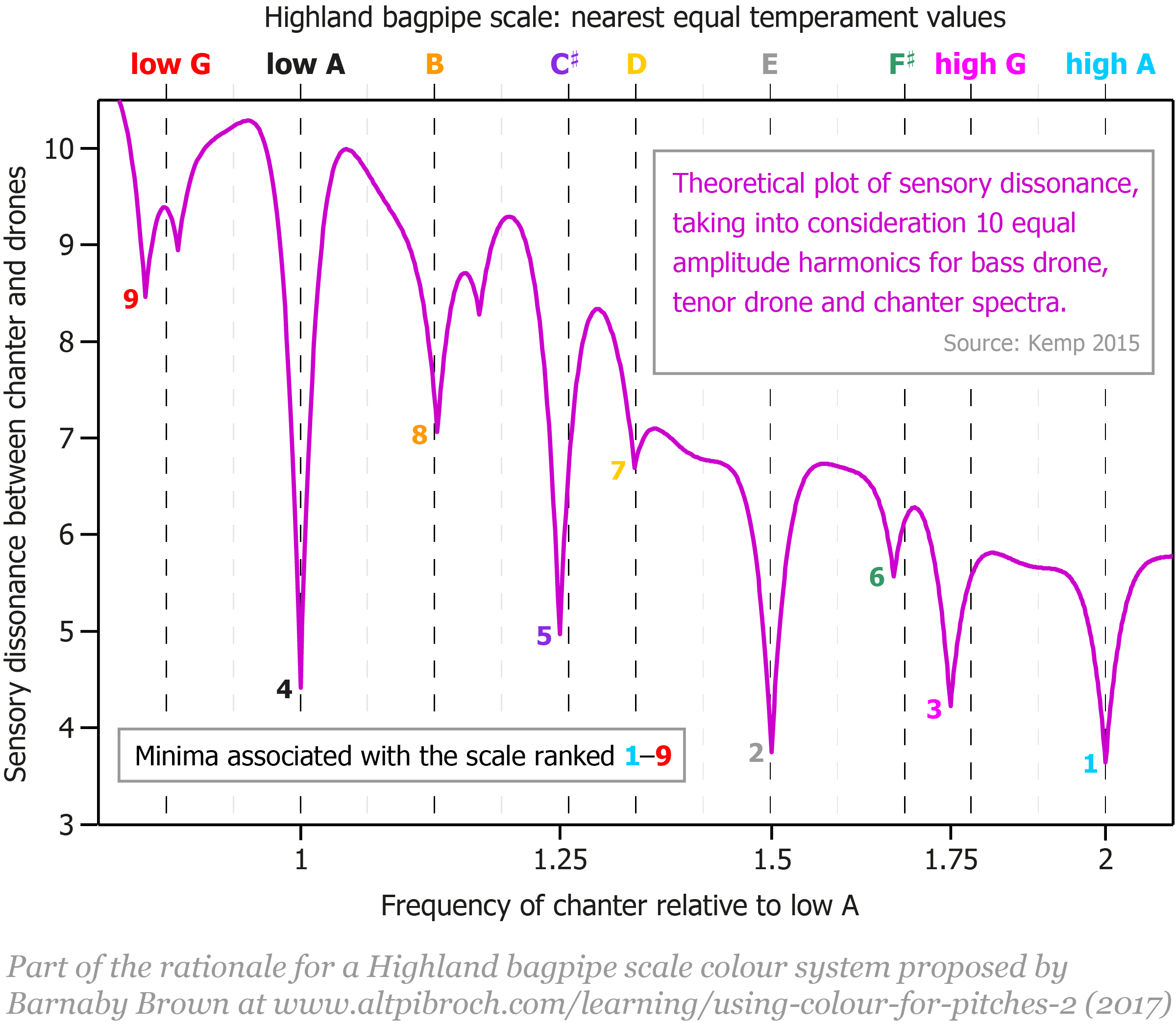 This is my reworking of a graph published by Jonathan A. Kemp in Piping Today, 75 (2015), p. 19. The minima ranked 1–9 correlate strongly with an intonation ideal for which we have evidence spanning four centuries: from the chanter of Iain Dall MacKay (c. 1656–c. 1754), one of pibroch’s greatest composers, to the recordings of Donald MacPherson (1922–2012), the most successful competitive piper of the 20th century.

Here are the colour names I would use in everyday speech and educational materials:

The web names in the text colour palettes of WordPress, Gmail and other applications are slightly different:

The hex colour codes for designers and publishers are as follows:

As CSS and HTML allow for 16.777216 million colours, these values are not prescriptive. I will be tweaking them myself in efforts to polish the system further. They have the practical advantage of being currently available in the default ‘Text color’ palette of WordPress, with the exception of Blue violet. But it is easy to get any colour in WordPress: just click on ‘Custom…’ in the palette and type in the hex code.

One of the principles of this 9-colour system is to give adjacent scale degrees complementary hues. This reflects the tonal behaviour of Highland pipe music, making the contrasts within and between pieces clearer to the eye. A key signature of two sharps tells us nothing about the key or ‘taste’ of a bagpipe piece. This colour system aims to help to deepen musical understanding by allowing readers to see the tonality at a glance, revealing how the music works.

So-called Question and Answer phrases generally shift a section of melody (or a single pitch) up or down a tone. The result is a dynamic separation between two interlocking sets of pitches. They behave rather like vinegar and olive oil – sometimes blended, sometimes separate, depending on human intervention:

Melodically, the ‘vinegar’ pitches tend to clump together in opposition to the ‘oil’ pitches. Composers combine and contrast them in a multitude of ways to change the ‘taste’.

The reason for assigning the colours of the rainbow to set 1 can be seen in Kemp’s graph above: as these five pitches ascend, their sensory dissonance falls. Set 2 fills the remaining colour space with the objective of maximising two things:

The neutral colours black and grey are appropriate for the tuning notes, low A and E,  because the impact these pitches have on tonality is minimal. Their prominence in the drone spectra makes them effectively omnipresent without ever being played. All pieces contain E and over 99% contain low A; what defines a Highland bagpipe tonality is the presence or absence of the other seven pitches.

Melodically, C is most often paired with low A and High A – and contrasted with B and D. The choice of indigo responds to this traditional tonal behaviour. Although it has the web name ‘blue-violet’, it is also called ‘deep indigo’ and lies between electric indigo and pigment indigo.

The colour of high G is close to low G in hue. The tonal contrast between high G and high A also evokes the sunsets I witnessed when living on the Isle of Skye. Never have I witnessed so many spectacular skies as looking from Waternish across loch Dunvegan, past Borreraig, over to the mountains of Harris.

During the Christmas holidays, I was clearing out my filing cabinet and came across this printout from 1998: 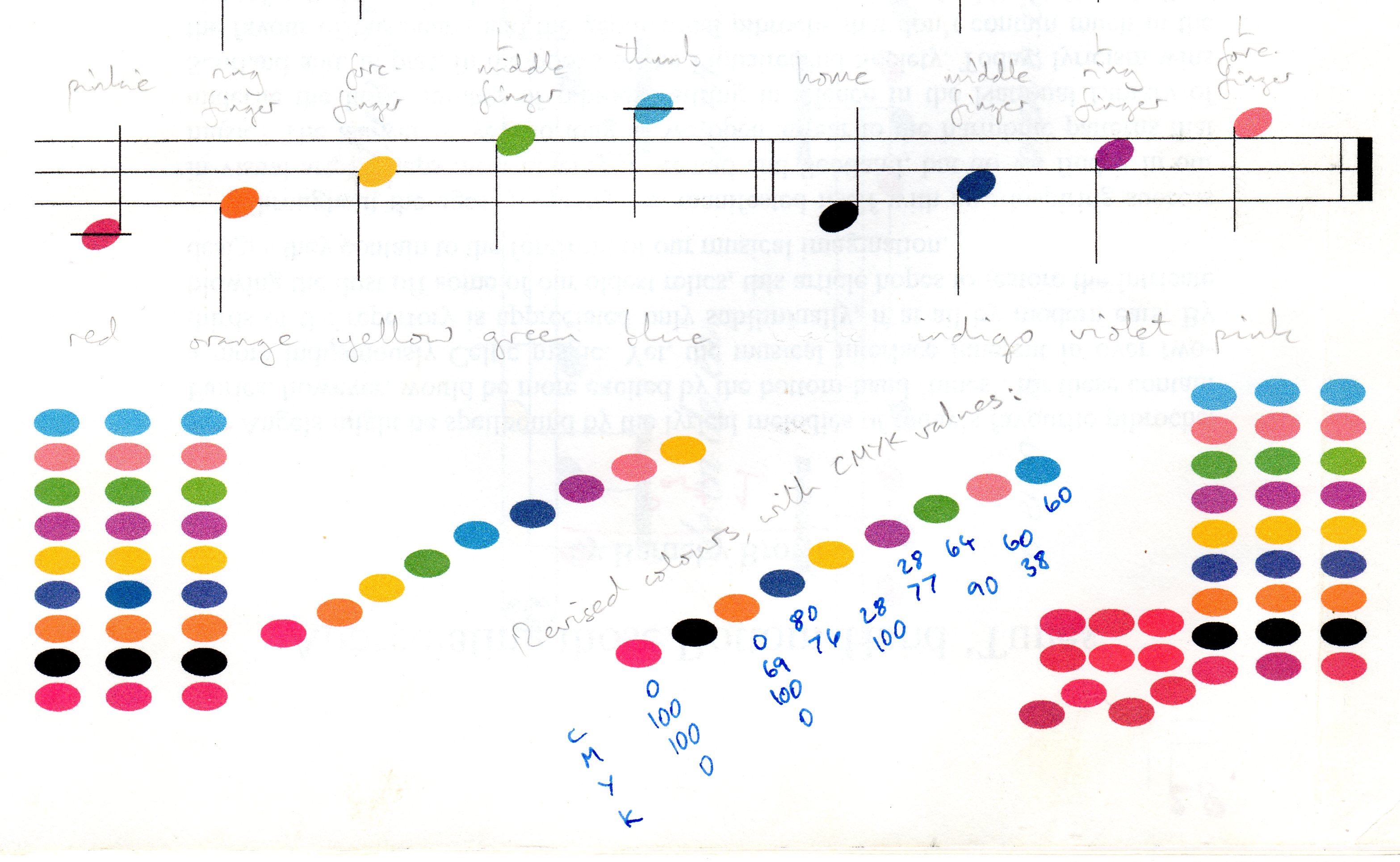 This 9-colour system was developed for an 8-year-old pupil in Berlin, where I was living at the time. The only revision I have made now is to increase the distance in hue between members of the ‘oil’ set, making E grey. Splitting the difference between the 1998 colours of C–E and E–G, giving the results to C and G, makes the four members of this set easier to tell apart.

I find it reassuring that a colour system I developed purely on the basis of cultural knowledge (i.e. as a result of hearing and playing Highland bagpipe music) ties in so well with Jonathan Kemp’s graph of sensory dissonance. This scientific support gives me confidence to resurrect something child-friendly as a solution for my PhD thesis.

I did not publish it 19 years ago because 1) it did not photocopy well, 2) none of the piping magazines then were in full colour, and 3) most desktop printers were black and white. Today, multifunctional and digital copiers are fast consigning black and white analogue copiers to history, all the piping magazines are in full colour, colour inkjet printers are ubiquitous and everyone has a colour screen. With these obstacles removed, I feel its time has come.

I have not taken colour blindness into account and would welcome feedback from anyone who finds any of these colours difficult to distinguish. An idea offered in a comment to Part 1 was to use lightness values that would produce nine shades of grey. This would make the system backward compatible for black-and-white printing, but this advantage is outweighed by the disadvantage of poor readability due to low contrast between adjacent shades, and between lighter shades and the background.

To help make the colours easy to read, both on screen and on paper, my approach is to use boldface, a larger font size and to choose a font in which the ‘bold’ is extra-bold, like a headline (e.g. Georgia bold, point size 20).

Next week, in Part 3, I will look at Scottish Gaelic phonology, recordings of Rona Lightfoot, and the unorthodox spellings of Gaelic words used by our three earliest witnesses of canntaireachd: Colin Campbell, Niel MacLeod of Gesto and Angus MacKay. If canntaireachd is to be a useful tool, we need to be confident singing it. Rona is our greatest living exponent. What she does makes it much easier to understand the historical sources, getting closer to the pronunciation of John MacCrimmon.