A Cholla mo Rùin Colla mo’ Rún R; Cholle mo Run D2; Cholla ne Runn, Seachain a ’n Dunn tha misi an Laimh D2 notes; Colin a Ruun Dj. Coll, My Beloved. Nowadays the expression mo rùin is most familiar in love songs – Mo rùin geal dileas,‘my fair faithful beloved’ – and it is difficult to give a translation in modern language that captures the passionate attachment of a seventeenth-century clansman to his hereditary overlord, in this case the legendary Colla Ciotach. For history and traditions of the tune, see R. Black, ‘Colla Ciotach’. Trans. Gaelic Soc. Inverness, xlviii, pp. 201–243 (1972–4). For texts and fitting of words to music see A.M. MacDonald, The relationship between pibroch and Gaelic song: its implications on the performance style of the pibroch ùrlar. MLitt Thesis, Edinburgh University (1995), pp. 215–222.

Pìobaireachd Dhùn Naomhaig Piobaireachd Dhunnaomhaig / Piobaireachd of Dunyveg KB; Pibarach Dunivag SC. Dunyvaig’s Pibroch. In English as well as Gaelic contexts, the castle is pronounced with the accent on the second syllable – Dun-y-vaig. On its own, this pibroch title could concern either the castle or the chief who bore its name. Sir James MacDonald, 9th of Dunnyveg, lost the castle to the crown and to the rival Clan Campbell in 1608 but it was briefly retaken by Colla Ciotach in 1612–15 and again in 1647. Later that year, this intrepid adventurer, ‘Colla mo Rùn’, was caught and hanged from its walls after making a dramatic escape with the aid of a piper. Given that this story connects with the other titles of this pibroch, Pìobaireachd Dhùn Naomhaig is more likely to refer to the castle than to the 9th chief. See Keith Sanger’s notes below and Martin Coventry, Castles of the Clans: The Strongholds and Seats of 750 Scottish Families and Clans (2008), p. 360. Cf Cumha Chaisteil Dhùn Naomhaig (PS 146).

The various stories associated with this title have over the years produced much speculation especially regarding exactly how the music could have conveyed a warning. In 1982, Alec Haddow devoted eighteen pages in his book, The History & Structure of Ceol Mor, to bringing together and analysing the background to this tune, but came to the conclusion that, ‘It seems most unlikely that we can ever know what really happened, but the body of tradition is so great that one inclines to the belief that some version of the story is probably true’.

Although Haddow’s account had been the most exhaustive discussion of the tune’s background, it did miss one slightly earlier examination of the traditional lore surrounding ‘A Cholla Mo Rùin’ which appears at the end of an article on Colla Ciotach by Ronald Black in the Transactions of the Gaelic Society of Inverness, published in the volume for 1972-74. After discussion of the various merits of Dunaverty, Dunyveg and Duntroon, the three castles that appear in the various traditional accounts, he proceeded to make a case for Dunyveg, on Islay and that it was most likely to have been associated with the escape of Colla Ciotach from that castle in 1615.

That is where things have rested, apart from occasional discussions regarding what in the tune’s structure would have constituted a warning to someone in a boat approaching a castle, now in enemy hands, which is the basis of the traditional stories. But a recent discovery of a contemporary newspaper report which refers to the event throws some completely new light on what happened. It appeared on Thursday 30 September 1647 in Issue 133 of The Moderate Intelligencer, a paper which had been founded in London in 1645. At the end of an article on the final capture and execution of ‘Old Cole-Kettogh’ (reproduced below), it refers back to his previous escape from capture:

for when they had in those dayes hoaled this old Rebellious Fox (Cole-Ketogh) in a Castle within an Island, and had ships and force enough to have battered the place, and have taken him, he having two or three boats under the Castle in the dark night slipped into one of them, and set a Bag-piper in the other, who playing, All the ships boats followed the sound of the Bag-pipe, while in the mean time, Cole-Kettogh in the other Boat escaped away.

From what is known about Colla Ciotach, sacrificing his piper as a means to escape is not out of character and the words to the song ‘A Cholla Mo Rùin’ suggest a piper possibly devoted enough to do it. A more charitable view of the actions of Colla Ciotach, however, which also fits the description of ‘Pipers Warning’ slightly better, is that the piper was in the leading boat of the escape attempt with instructions to strike up if it encountered any of the blockading ships, thus warning off the following boat containing Colla Ciotach while drawing in the rest of the blockading vessels. Either interpretation suggests that it was the fact that the piper played rather than what he played that constituted the ‘warning’.

Another aspect of this account that might help to make sense of contradictory traditions is that the piper was presumably captured at sea, along with the boat. Since those left behind by Colla Ciotach in Dunyveg had yet to surrender, the predominantly Campbell forces involved in the blockade, given the prevailing winds and tides, may have decided that the easiest option was to sail the captured piper and boat’s crew to the Campbell Castle at Duntroon for imprisonment. This would nicely explain the confusion between these two castles in the traditional stories, especially if the captured piper was subsequently executed at Duntroon. 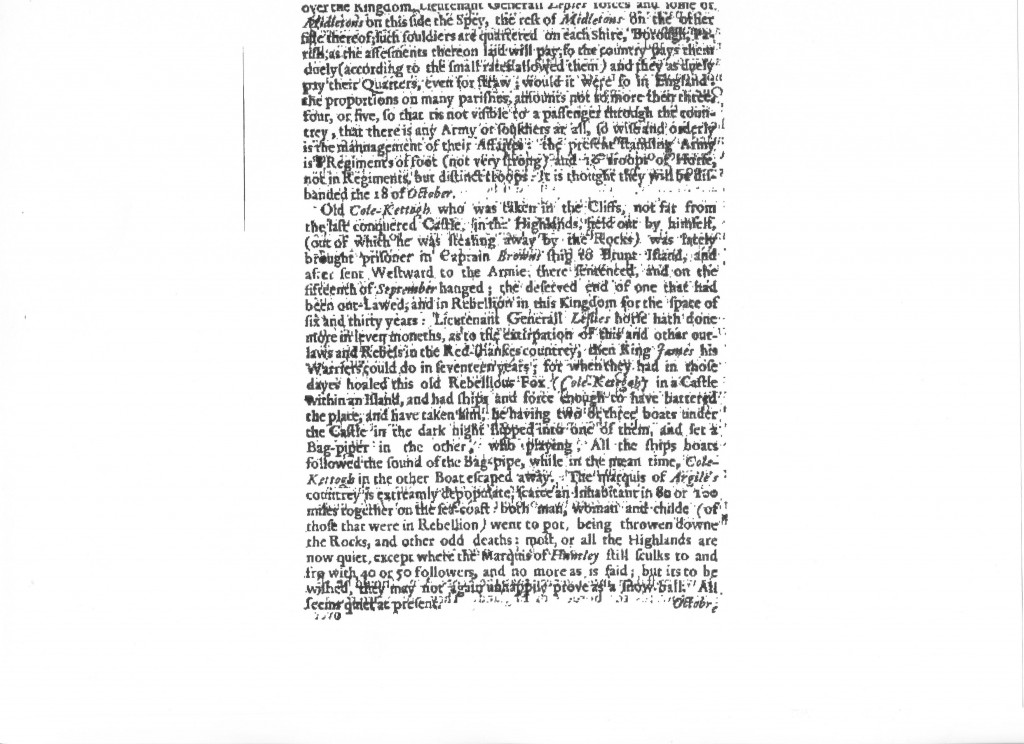